Over the years, some of the greatest architects of their respective eras have designed buildings for Doha, Qatar. These buildings were preceded by local vernacular architecture, of which a few notable examples remain. Each of these buildings responds, in its own way, to the local climate and culture.

Part of an ongoing research project on the physical growth of Doha over time, 4dDoha: Buildings is an educational web-based application that focuses on the city’s architecture across decades. Combining research, graphic design and interaction design, the iPad app allows users to sift through the data via a series of filters, while recording the users’ choices on a projected map. 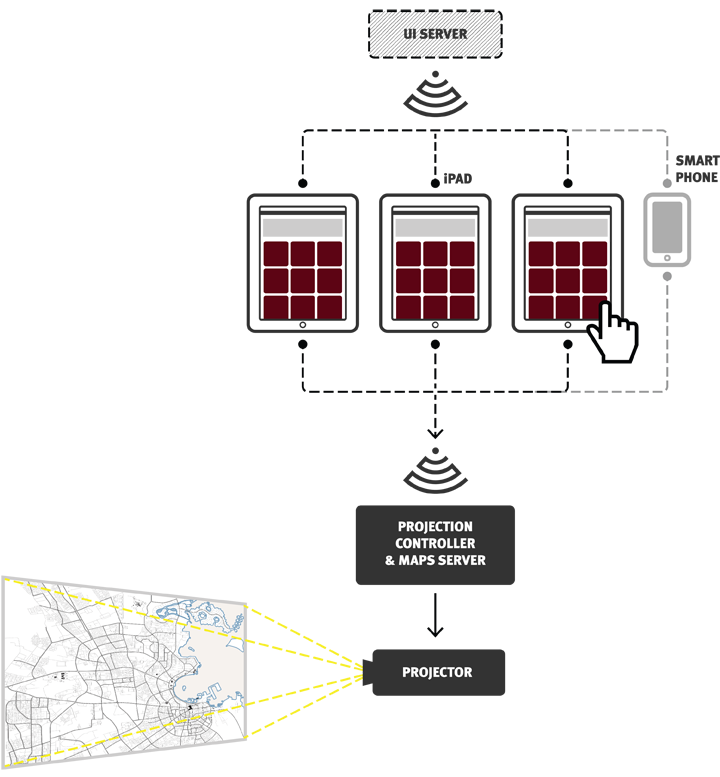 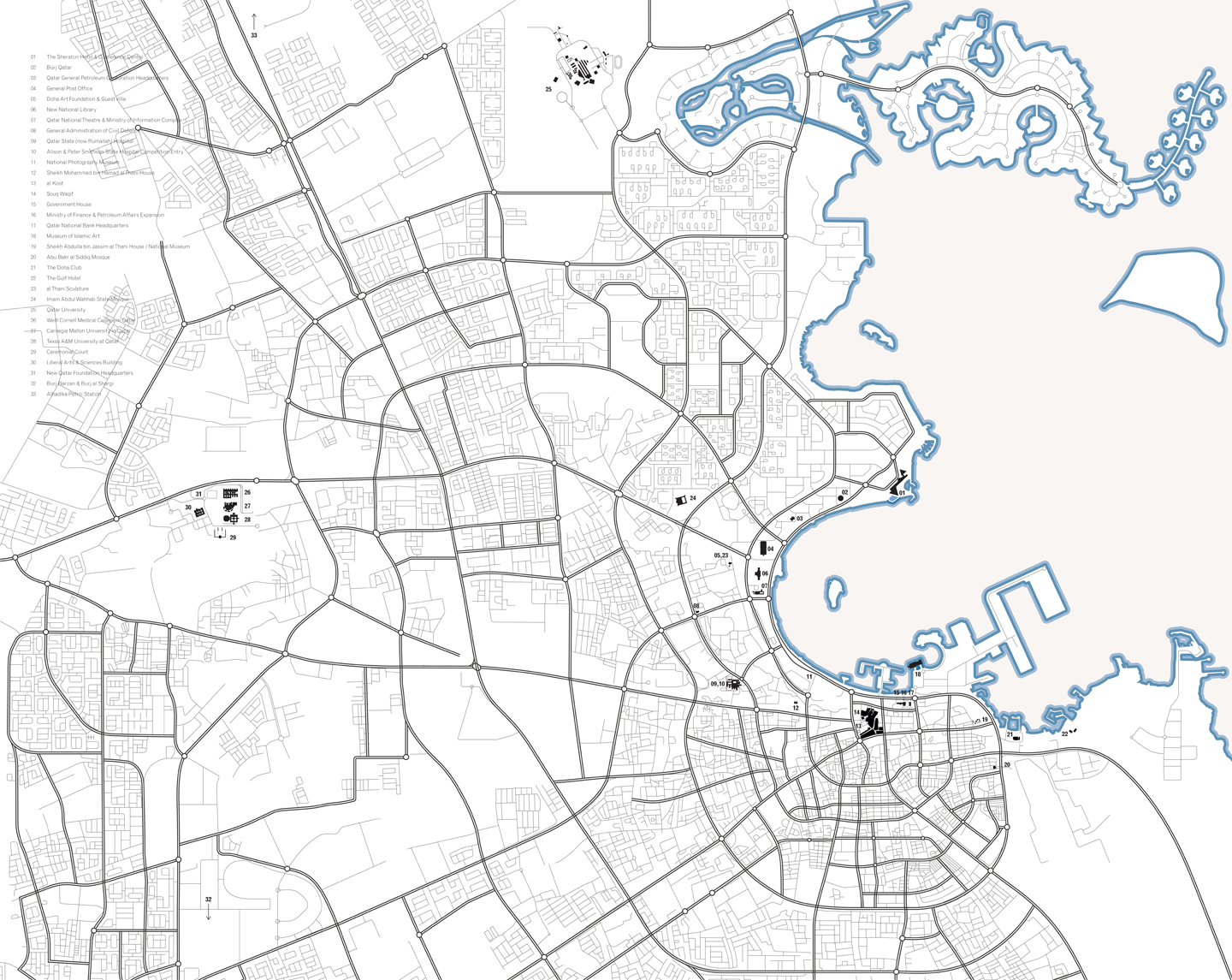 Perhaps more than any other single artifact, a building represents a culture’s values and aspirations, socioeconomic conditions, and construction techniques. Buildings project these attributes outward and become a means for a city or a nation to transmit its identity to others. It is not by accident that postcards of buildings are so common; an image of the city as represented by its architecture is disseminated outward across the globe.

The digital postcards exhibited here represent a curated selection of noteworthy buildings that were designed for Doha. They range in time, location, use, style, and built status. These categories allow for different means of sorting the information: into different eras (pre-oil, independence, realignment, and expansion), by location in the city, by programmatic function (cultural, government, residential, or commercial), by architectural language or style (vernacular, modern, postmodern, or contemporary), and by its current condition (built, demolished, unrealized, or renovated). Together, these buildings weave a coherent narrative of the city’s past, present, and future. 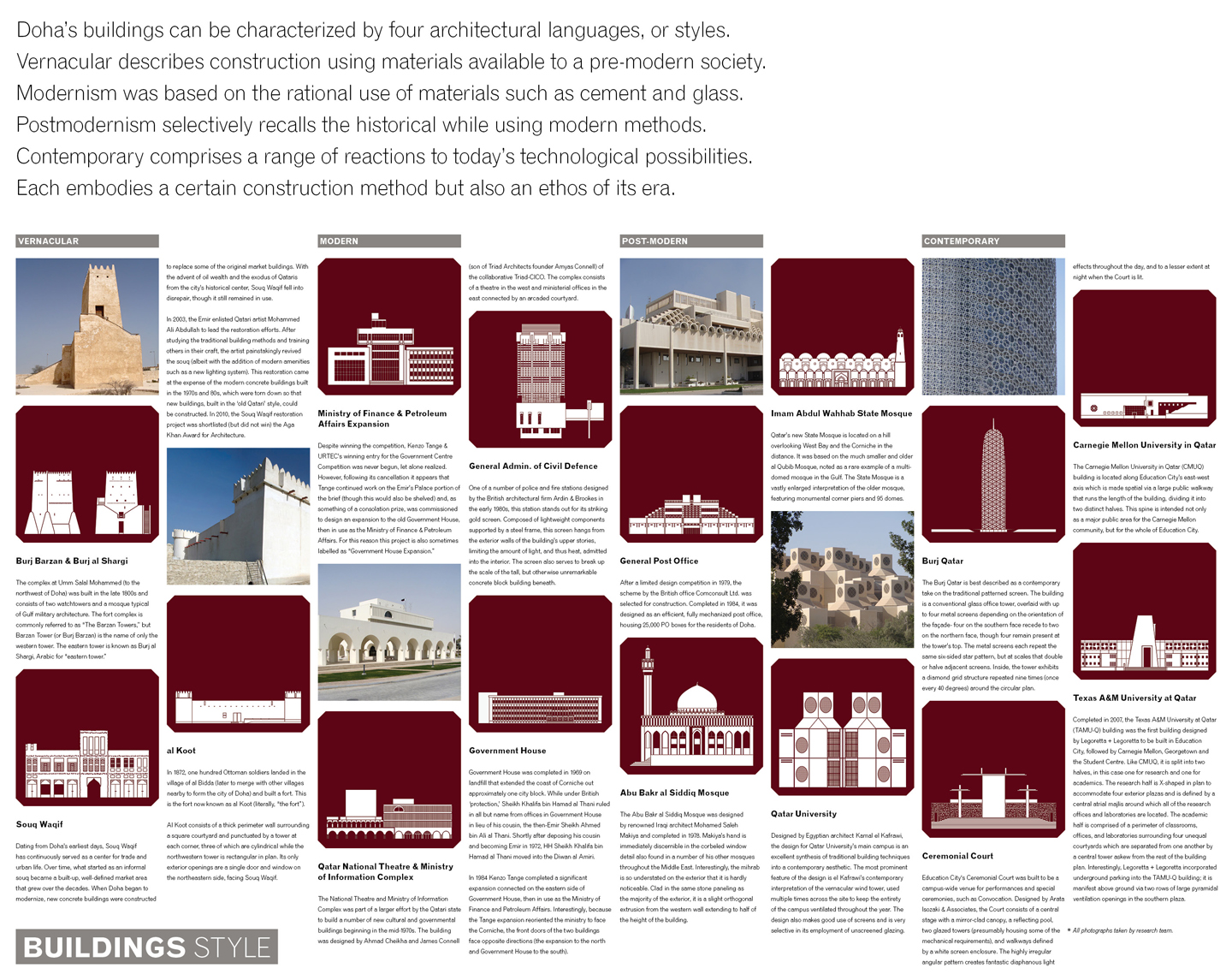 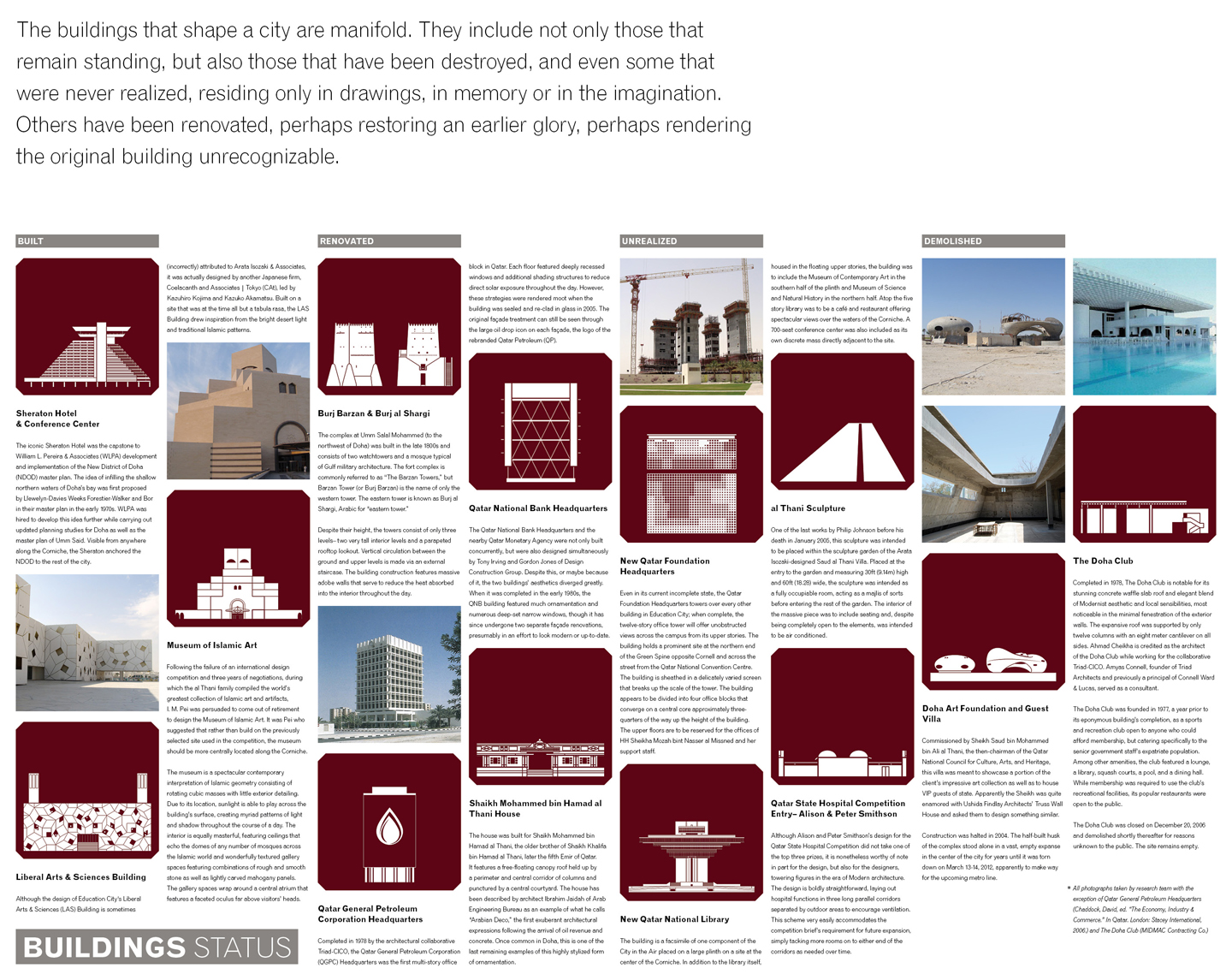 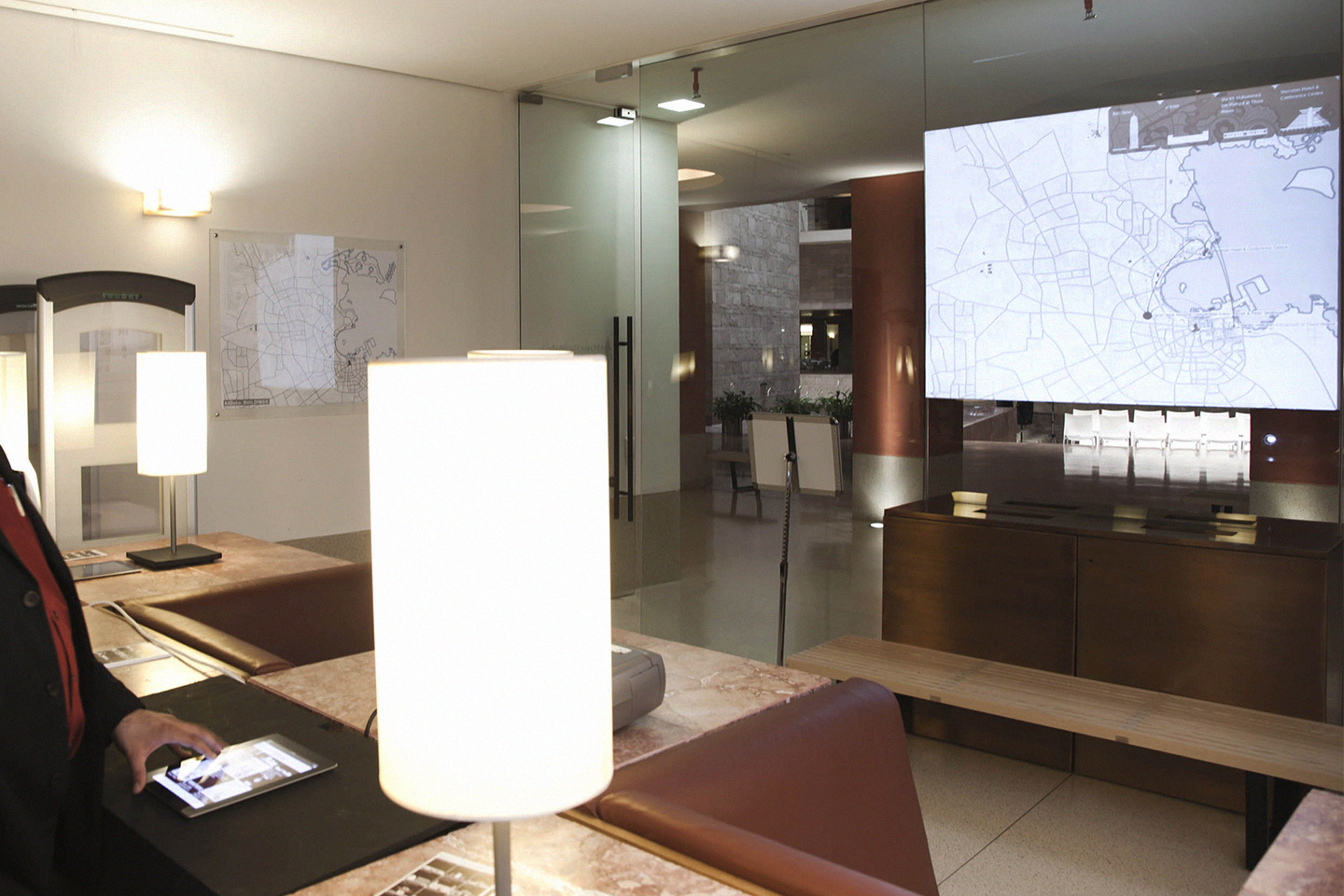 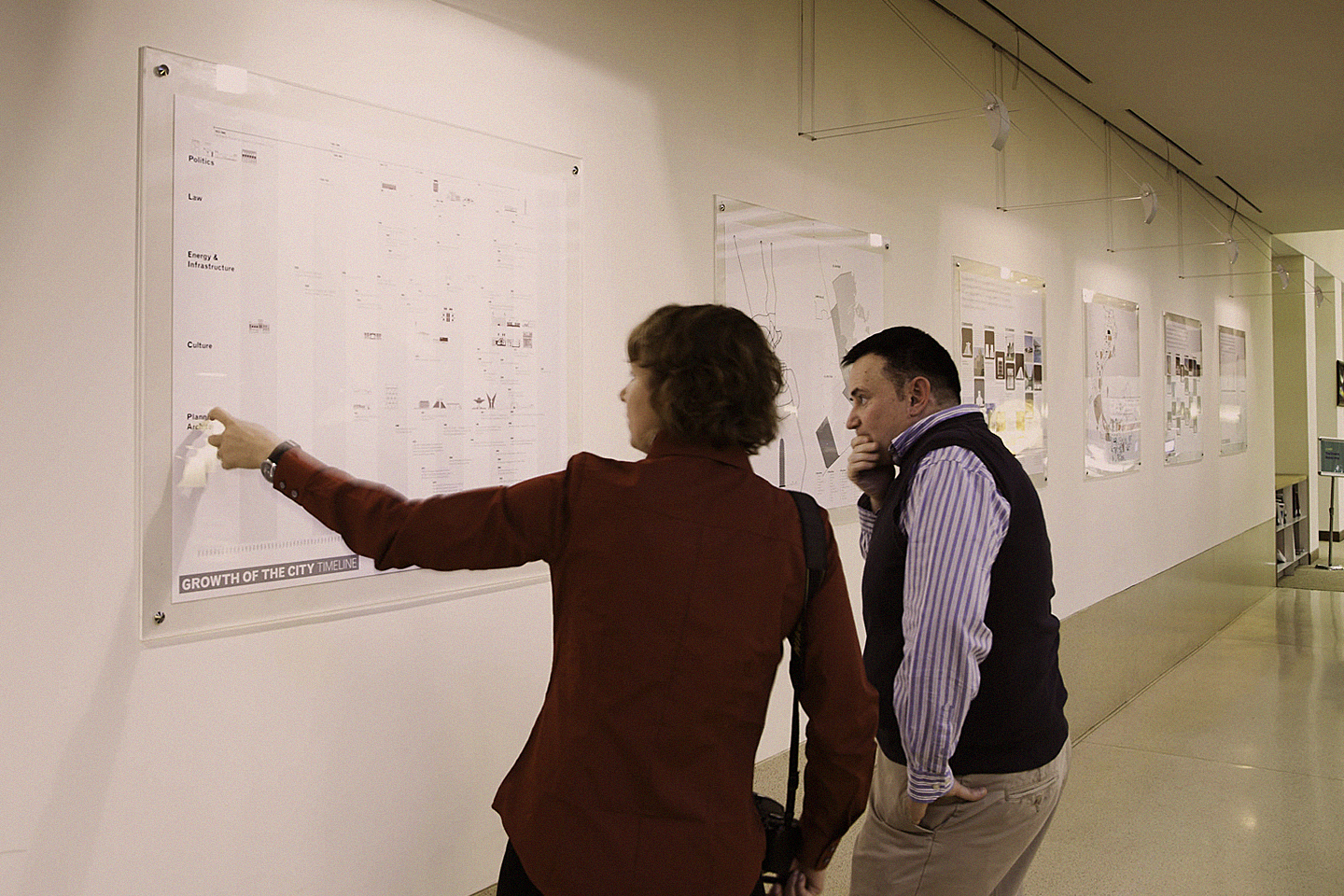 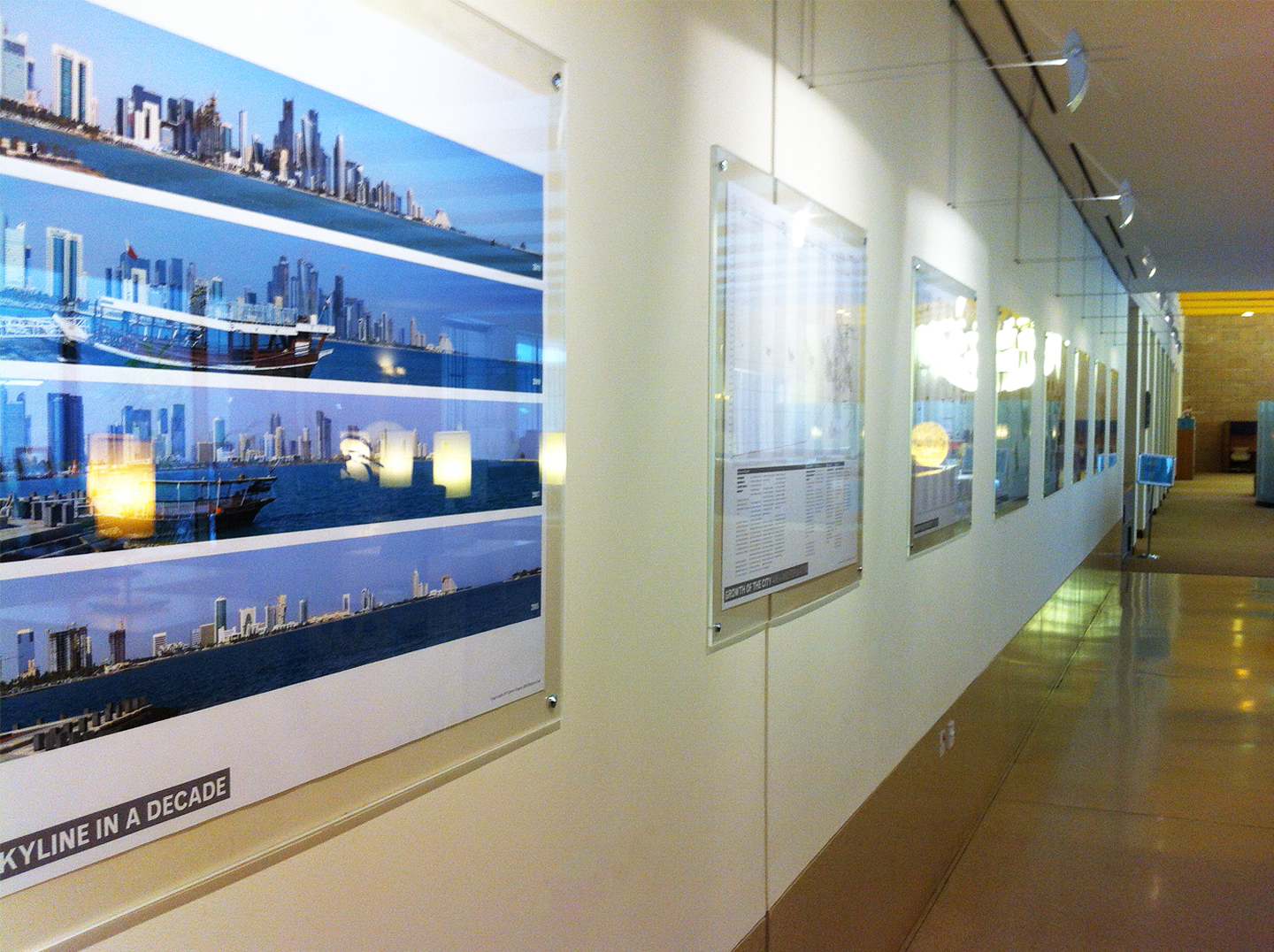 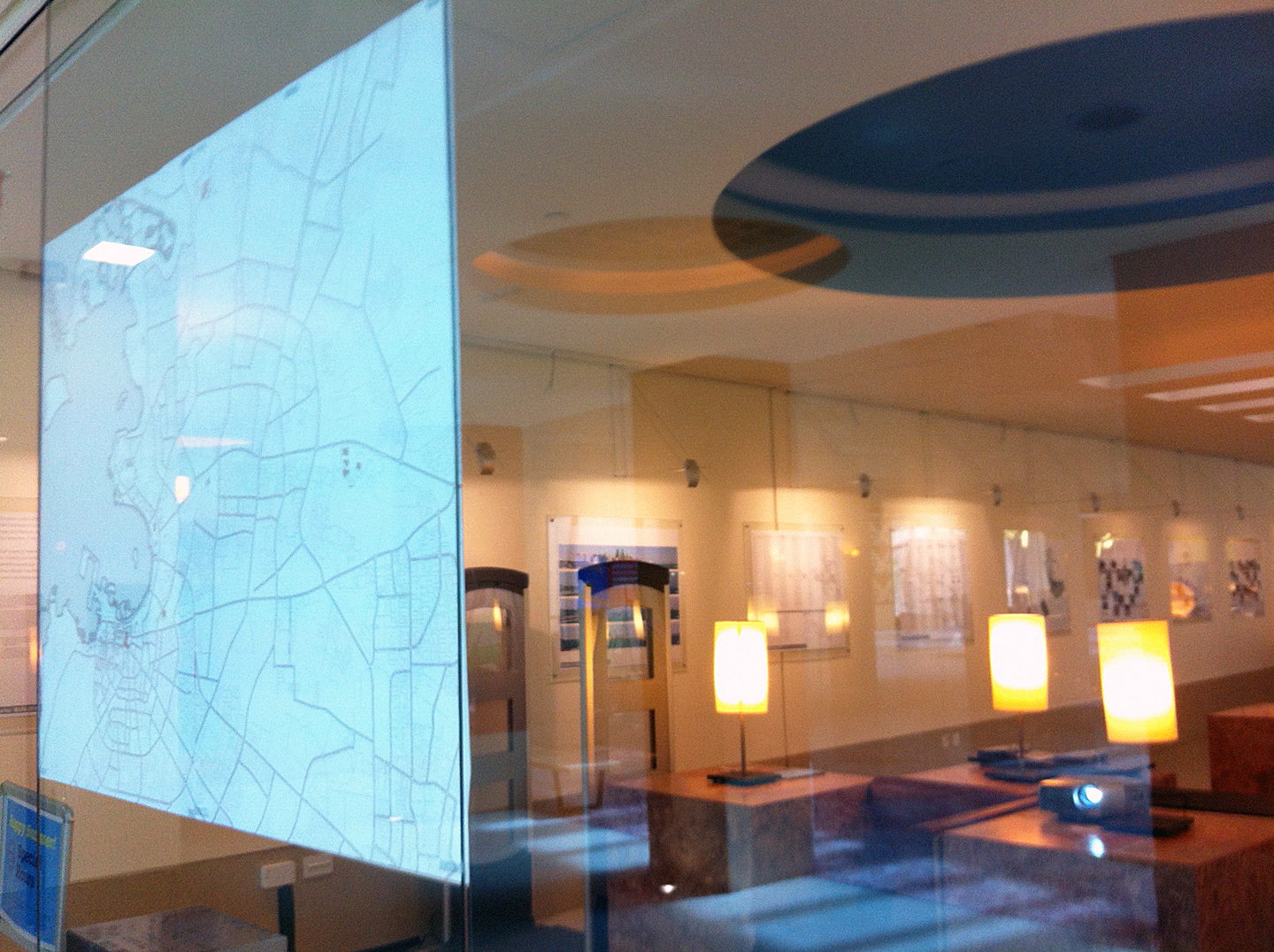 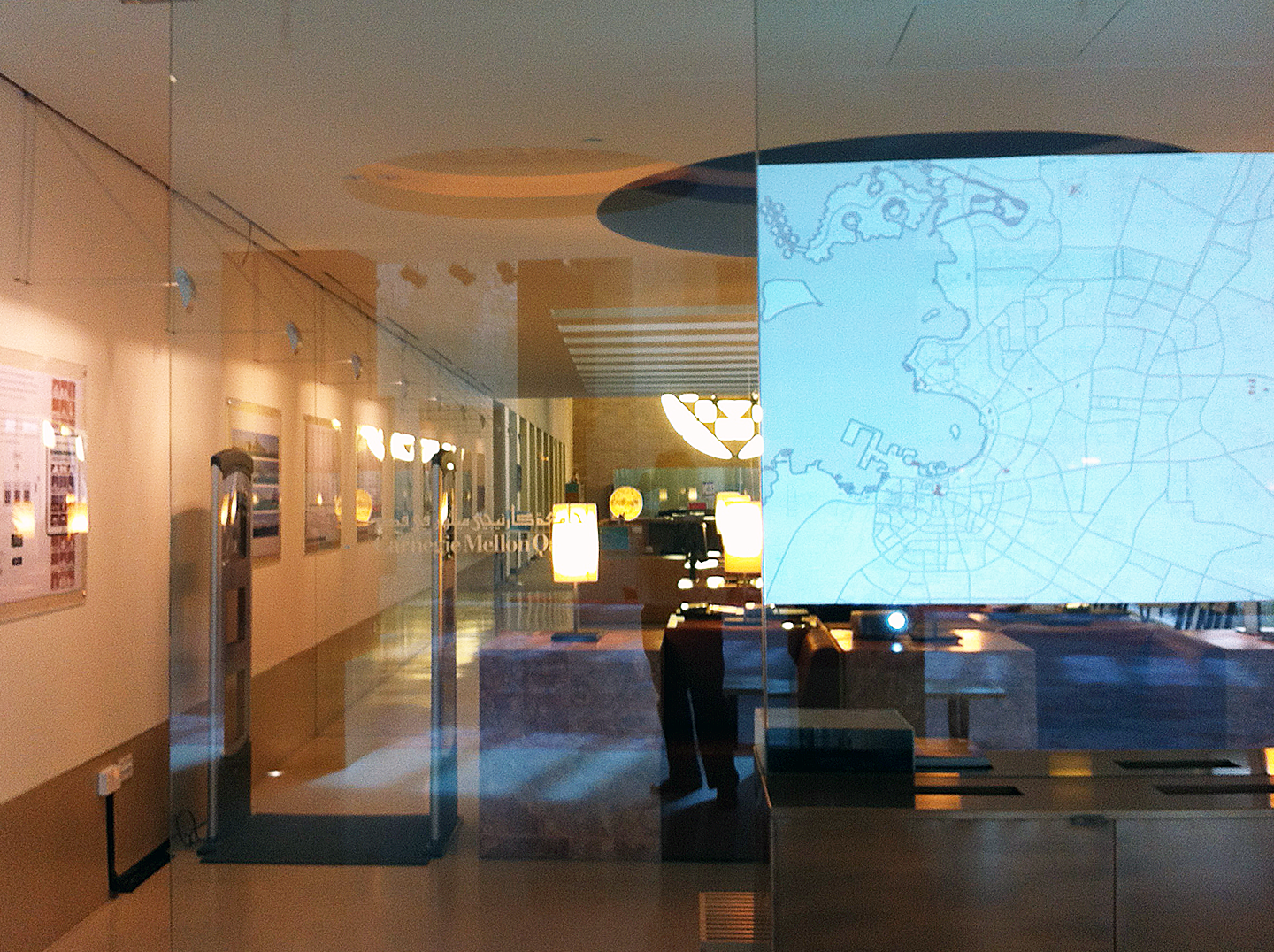 The Ecologies of Scale exhibit marked the debut of 4dDoha v1.0 as an art installation and a repository of information about Doha's growth over time. The initial phase of the project intended to serve as a catalyst to collect and disseminate further content on Qatar’s urban growth. 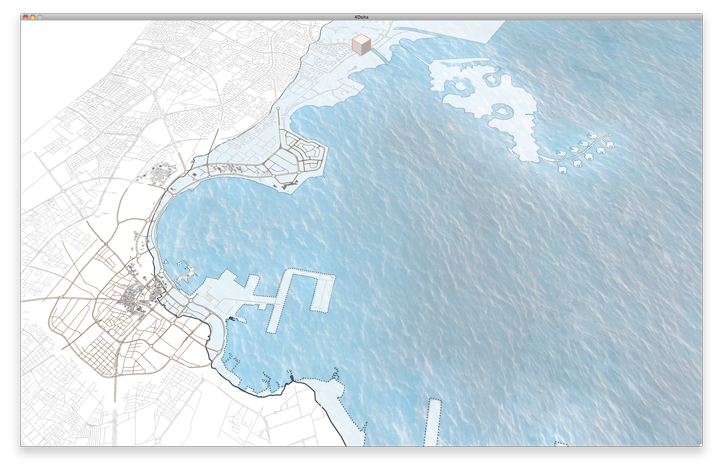 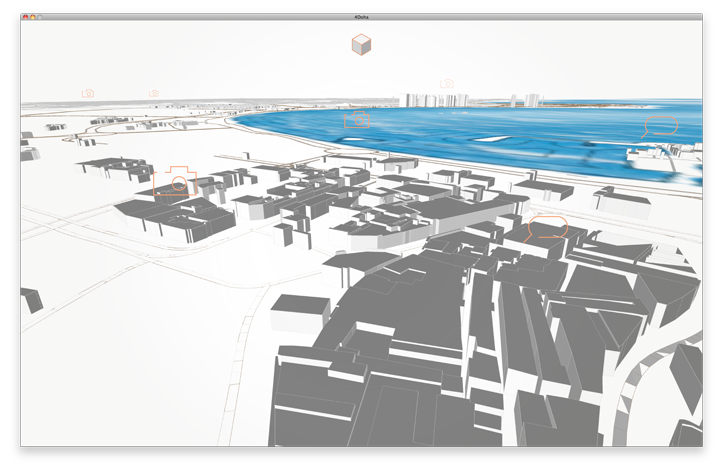 A screenshot of the interface in model space. CityEngine's ability to create "versions" of a building type allow it to infill unknown areas quickly and import specified buildings dynamically.

4dDoha addresses these transformations by tracing the physical growth of the city across time through an interactive display that allows users to track a variety of changes through different eras, from the pre-oil period before 1947, through the current expansion facilitated by natural gas extraction, followed by the potential for continued diversified economic and physical growth. The project focuses on making spatial what was once only available as two-dimensional information, allowing one to examine the morphology of the buildings, the road network, and landfill additions creating seaports, airports and causeways. 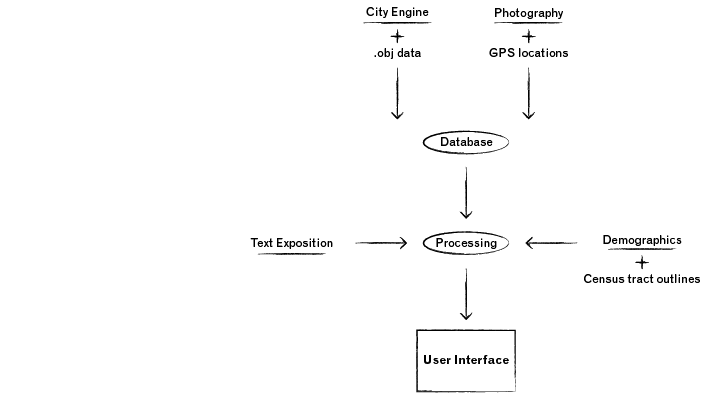 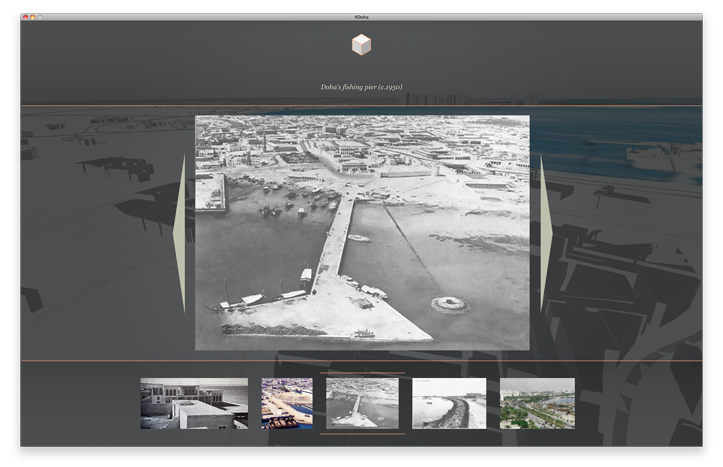 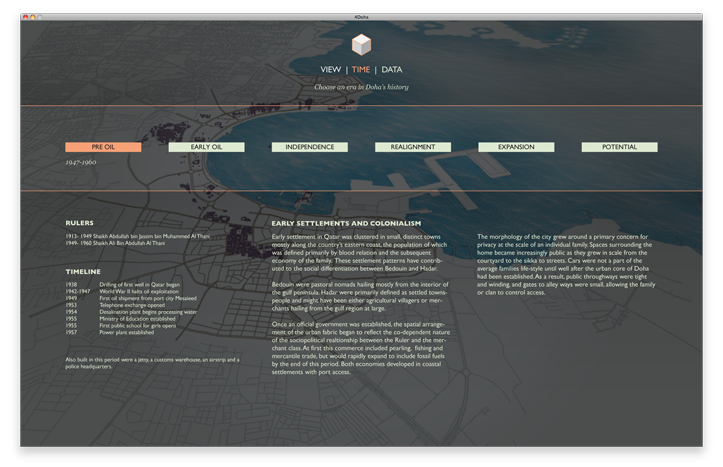 4dDoha has the ability to pull in many data types to view Doha's growth comparatively. Conceptually, any kind of data could be included.

Data has been acquired through a critical urban reading of historical aerial imagery, as well as current Geographic Information Systems (GIS) information. Through British aerial surveys of the country taken periodically from the late 1940s to the early 1980s, as well as subsequent aerial views, the project team created a series of twelve historical mappings, tracing the transformation of the city from 1947 to the present day. The two-dimensional urban fabric was then three-dimensionally modeled using Rhinoceros and CityEngine software programs. Finally, Processing allows one to access the interface through three distinct portals: view, time, and data. These hypermedia maps integrate both narratives and historical images so that one creates their own interpretative pathways while exploring the interface.